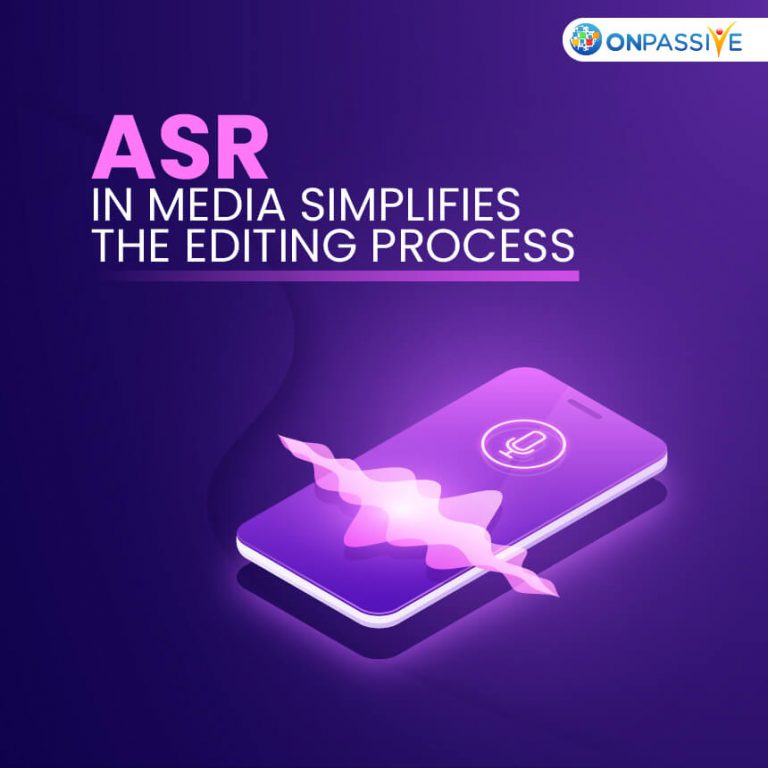 Imagine having your computer automatically transcribe any speech you hear on television, radio, or the web. That could be a fantastic opportunity for companies and individuals to tap into – but first, we need to understand what exactly it means for automatic speech recognition to be used within the media industry. But before that, let’s know what automatic speech recognition is.

Automatic speech recognition (ASR) is a technology that allows computers to understand human speech. ASR technology has been around for a long time but has recently seen a resurgence in popularity due to the growing number of smartphones and tablets that include ASR capabilities. This article will discuss the basics of ASR technology and how it works. We will also provide some tips on how to improve your ASR skills.

Role Of Automatic Speech Recognition In The Media Industry

As the industry moves towards more and more automation, automatic speech recognition (ASR) has become an essential tool for both media professionals and consumers.

The application of automatic speech recognition (ASR) in the media industry has seen a big jump in recent years. Media organizations are now using ASR to improve the quality of their content by recognizing and understanding human speech.

Automatic speech Recognition in media can be used for various purposes, including transcription, automatic summarization, and machine learning. In transcription, ASR can help to speed up the process of converting audio files into text. Automatic summarization is another use for ASR that allows the automated creation of summaries of articles or other readers. This can be helpful for people who have trouble reading long texts or need an overview of a particular section. While there are still some limitations to ASR’s use in the media industry, it is growing increasingly important as technology improves.

As the world becomes more and more digital, it is becoming increasingly important for media to be able to understand and interpret what people are saying. Automatic speech recognition (ASR) is a technology that can help make this happen. Here are some of the benefits of ASR in media:

Accuracy: ASR is highly accurate, meaning it can accurately transcribe what people are saying even if they speak in a foreign language or with an accent. This is important because it allows media to capture all types of voices, not just those with formal training.

Speed: With automatic speech recognition, media professionals can quickly transcribe recordings and get them into the system without waiting long periods. This can make a significant difference in getting content out quickly while still maintaining high levels of accuracy. Automatic speech recognition can also create subtitles or captions for videos. This can be extremely helpful for people who are deaf or hard of hearing and want to follow along with a video without having to listen to it.

Plain Language: ASR can also help make content more accessible by translating it into plain English. This makes it easier for people with disabilities to access information and participate in discussions.

Time Savings: ASR can speed up the transcription process by automating many of the tasks involved in transcription. This can save time for both the user and the media organization.

Reduced workload: Automated transcription can help reduce the workload for media professionals by taking some of the work off their hands. This can free them up to focus on more critical tasks, such as creating new content or developing new strategies for marketing their products or services.

Overall, ASR is an important technology that can improve the accuracy, accessibility, and speed of transcription for media organizations.

Speech recognition technology is becoming increasingly popular in media for its ability to transcribe spoken words automatically and insights into users’ speech patterns. The following is a list of a few of the most popular tools:

Microsoft Speech Recognition: This platform is available as a standalone tool and integrated into various Office products. MS Speech Recognition is an automatic speech recognition tool that is used in media for the transcription of spoken words. It is free software released by Microsoft Corporation.

Apple Siri: Apple’s Siri feature is becoming increasingly popular in the media. This automatic speech recognition tool is being used to control media playback, schedule tasks, and more. This virtual assistant is available on the iPhone and iPad and can be used to initiate actions like calling a taxi, reading a text message, or starting a music playlist. As Siri becomes more integrated into our lives, we’ll see ways it can help us get things done.

With the help of automatic speech recognition, Google Voice can be used in media to help with the transcription of recordings. This is especially useful for podcasts, where the host may not have time to transcribe every recording by hand.

Amazon Echo: One of the most popular features of Amazon Echo is its automatic speech recognition capabilities. This voice-activated speaker can control music playback, manage alarms and timers, make purchases from Amazon.com, and more.

While Amazon Echo is an excellent tool for those looking to automate their media consumption, it can be challenging to know where to start. This guide will walk you through some of the most common uses for the Echo and help you get started using this unique technology in your media workflow.

Google’s Dragon– This tool is being used increasingly in the media. Automatic speech recognition (ASR) technology is used to help people with disabilities communicate more easily. It allows people with ALS, multiple sclerosis, and cerebral palsy to speak without assistance. Google developed the Dragon in collaboration with the University of Southern California’s Institute for Creative Technologies.

The ASR tool can be used to create digital subtitles and transcriptions for videos, as well as create searchable transcripts of interviews. The Dragon has been used on shows like “The Office,””House MD,” and “Lost.” It has also been used in news broadcasts, such as the BBC’s coverage of the Syrian Civil War.

Amazon’s Mechanical Turk– This tool is excellent for automating speech recognition tasks. The service is commonly used in media to transcribe audio recordings, which can be difficult and time-consuming to do manually.

Mechanical Turk can quickly and easily identify specific words or phrases in a recording, making it a valuable tool for transcription and other tasks related to audio content. Mechanical Turk can also be used to transcribe video content. This is especially useful for videos that are difficult to understand or have a lot of background noise.

Automatic speech recognition (ASR) is quickly becoming an essential tool in the media industry. ASR allows media professionals to convert audio files into text, which can then be used for transcription and other tasks. This technology has many benefits, including speeding up workflows and reducing errors. ASR is also becoming more accurate, making it an increasingly valuable tool for journalists and other media professionals.