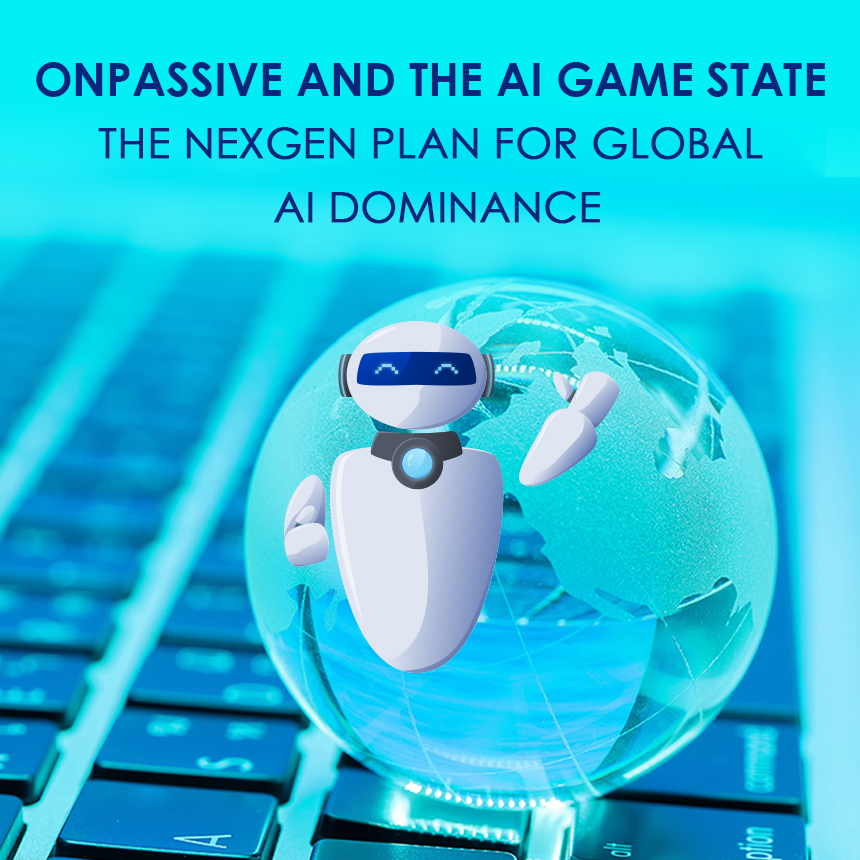 ONPASSIVE and the AI game state

China was one such onlooker and was only too familiar with the game; much more so than the western world.  That was due, in large part, because its population is not only aware of the game, but takes it very seriously.  So much, that some would even consider it a sacred game; one that connects us… humans… to the universe through its complexity.

As a result of how seriously the Chinese respected this game, and how completely they understood the ramifications of AlphaGo’s algorithmic prowess, move 37 of game 2 served as the wake-up call to a strategy that birthed and solidified a Chinese quest for world AI-domination.

Yeah, I know.  The idea of world domination has historically leaked from the maniacal mind-stuff of old dictators, wars, or movies. Despite that, in July 2018, China actually came out with a written plan they called The Next Generation AI Development Plan.

With that plan, the Chinese Government literally put the world on notice, written notice at that, of its two-fold intention to catch up with America’s AI capability by 2025 and to globally dominate the AI space by 2030.

If truth be told, China has been doing a very good job of executing on that plan ever since with accomplishments that are nothing short of amazing.  Never has a country moved so fast in pursuit a particular endeavour.

It took about two and a half years for China’s AI implementation to go from minimal activity with barely a “hoof-print” to tight-fisting the reigns of a small herd of Unicorns; almost 20, newly-formed, billion-dollar AI companies.

Meanwhile, ONPASSIVE had by this time pierced the conceptual barrier of a brand-new and distinct business model expected to disrupt the internet marketing space with its revolutionary business solution and introduced the GoFounders platform as its First-line Leader Community.

The business, and the business solution, represents an incredibly dynamic, new-age platform that’s powered by ONPASSIVE’s own, proprietary AI coursing through its processes and architecture.

But the new Chinese companies were powered by a new generation of ambitious young techs graduating in droves from Chinese universities and funded by a new breed of Chinese venture-capitalists.

This new breed of capitalists used the new techs against one another to develop the newest and most innovative ideas in AI served to push the global AI domination agenda forward at an unprecedented rate.  And it’s still working.

So, my hat is off to our entrepreneurial Chinese brothers and sisters.  Their companies that started as copycat start-ups developed their own entrepreneurship style that is resolute and amazingly fast.

Adding massive momentum to that strategy is an unbelievable work ethic and a winner-take-all mindset. We are now seeing first-hand they are a powerful force with a drive and aptitude to aggressively research and develop data collection to fuel their AI applications.

And these are the same characteristics… the same qualities… we see as ONPASSIVE gained momentum in the latter part of 2018. Motivated by past experiences provided by companies with no moral compass and what seems a total lack of ethics, ONPASSIVE Founder and CEO, Mr Mufareh, developed his own style of entrepreneurial prowess.

To his credit, ONPASSIVE is not only resolute and courageous but it’s also endowed with an unapparelled ethical standard.   Furthermore, Mr Mufareh’s “Do-it-or-die” mindset crushed all the risk factors one-by-one thereby setting the unwavering expectation of phenomenal success.  Under his leadership, all of these characteristics are woven deeply into the fabric of ONPASSIVE as a mesh of heart and high-tech.