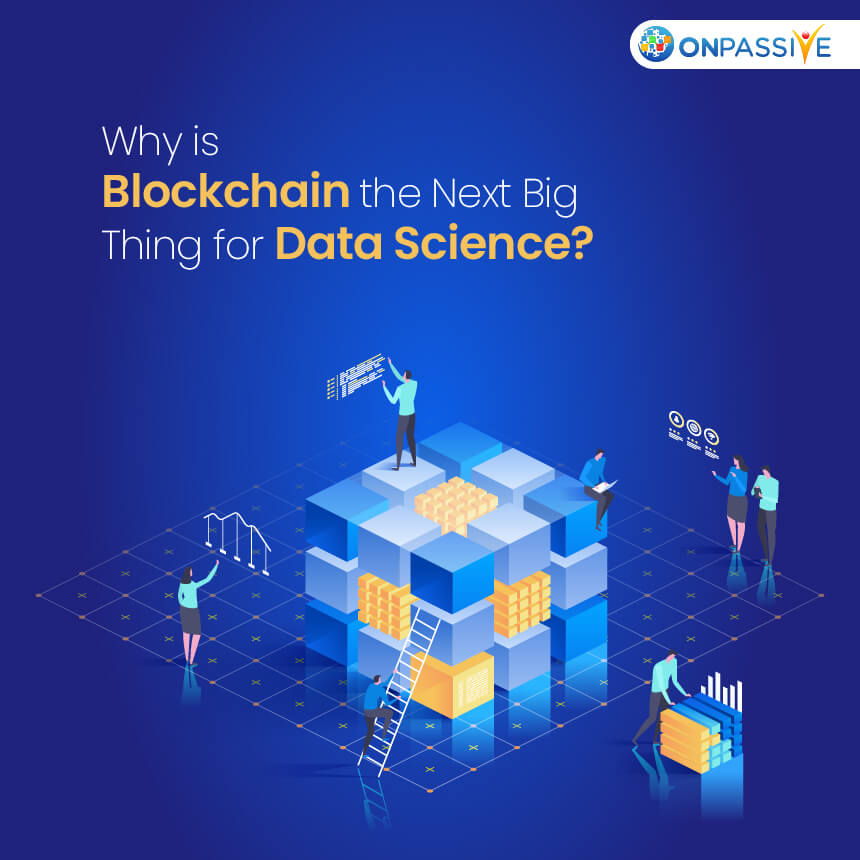 Big Data and Blockchain are two emerging technologies expected to revolutionize how businesses conduct their operations. Most of us believe these technologies cannot coexist and must be employed individually and down distinct routes. That will be inaccurate, however.

While data science focuses on exploiting data for efficient administration, data safety is provided via the blockchain’s decentralized ledger. With the recent explosion in decentralized finance, the explosive expansion of Bitcoin and other cryptocurrencies, and the ongoing NFT mania, Blockchain technology is a hot issue.

In the eyes of a data scientist, Blockchains are also a fascinating supply of high-quality data that can be utilized to apply statistics and Machine Learning to solve various intriguing challenges.

However, this blog attempts to answer these issues by offering an unbiased assessment of the current situation and the trends developing at the nexus between Data science and Blockchain technology.

A blockchain is a type of online ledger that records every transaction. Due to its decentralized nature, this ledger cannot be manipulated by anyone because there is no central authority.

Since changing one block will also change all the blocks that follow it, the data stored in the blockchain data structure cannot be altered. If a previous block is changed, all subsequent blocks are also limited. As a result, no change, not even in one block, may be unnoticed.

The need for Blockchain developers has increased over the past few years, along with projects developing various blockchain applications.

According to reports from platforms for independent contractors like UpWork, blockchain expertise continues to be in high demand. Similarly, experts in other fields like legal studies are said to have a significant advantage if they are skilled with blockchain technology or have a basic understanding of it.

What is Data Science?

One of the current hot fields in technology is data science. In its subdomains, such as Predictive Analytics, Diagnostic Analytics, and Descriptive Analytics, the discipline sees a lot of developments.

Extraction of insights and other information from data, both structured and unstructured, is the goal of data science. Machine Learning, Data Analysis, statistics, and other cutting-edge techniques used to understand the natural processes that use data are included in the discipline of Data science.

The Relationship Between Data Science & Blockchain

Unlike in fields like Fintech, healthcare, and supply chain, where Blockchain is now widely used, parts of Data science have not been thoroughly investigated using the technology. Some people believe there is little to no connection between the ideas.

To begin with, both blockchain and data science work with data. While blockchain stores and verifies data, data science analyses it to derive insights that may be put to use. Both use algorithms that were developed to control interactions with different data segments. You will soon notice a recurring theme: “Data science for prediction; blockchain for data integrity.”

The following are a few ways Blockchain technology will enhance Data Science:

Blockchain facilitates peer-to-peer interactions. Any peer can review the complete procedure and determine how the results were acquired, for instance, if a published account improperly explains any approach.

Anyone may learn whether data is reliable, how to keep it, how to update it, where it comes from, and its appropriate utilization thanks to the ledger’s transparent channels. In conclusion, blockchain technology will let consumers follow data from its entry to its exit point.

Real-time data analysis is quite challenging. Real-time monitoring of changes is the most effective method of spotting scammers. However, real-time analysis was not feasible for a very long period. Due to Blockchain’s distributed nature, businesses may immediately identify any irregularities in the database.

Spreadsheets have the feature of allowing users to view data changes in real-time. Similarly, Blockchain also permits simultaneous work on the same type of information by two or more persons.

When data is transferred quickly and smoothly, organizations can benefit greatly. With paper records, it is exceedingly challenging. This problem is made considerably more difficult when the information inside is needed somewhere else. Although these documents would eventually reach the other department, it might take a while and run the danger of getting lost in the mail.

Due to its ability to enable simultaneous and real-time access to data by two or more users, Blockchain is currently the subject of most data scientists’ fascination. Therefore, the administrative process is expedited when information flows freely.

Blockchain’s digital ledger’s data is kept in various nodes, private and public. The information is cross-checked and analyzed at the entry point before adding it to further blocks. The technique itself can be used to check the data.

The improvement of data storage capacity was the primary emphasis of organizations during the past ten years. That was settled toward the end of 2017. Most organizations’ current focus is on safeguarding and confirming the data’s integrity.

The primary cause of this is that companies collect data from many centers. Even data generated internally or taken from government offices may have inaccuracies. Additionally, other data sources, like social media, may potentially turn out to be unreliable.

You must be conscious that prejudices frequently arise when there is only one authority. Too much reliance on a single person can be dangerous. Because of trust difficulties, many businesses refuse to give any third party access to their data.

Thanks to Blockchain technology, the lack of trust no longer prevents sharing information. Sharing information becomes essentially impossible as a result of this. Sharing the knowledge at their disposal allows organizations to collaborate efficiently.

The discipline of Data science is ever-changing. Data scientists will be able to accomplish several milestones that were previously thought to be unachievable thanks to the integration of Blockchain technology, which will make transparent record keeping and strong security a reality.

Even though Blockchain is still a relatively new technology, early findings from some businesses testing them show that it can be used successfully. Due to the buzz surrounding it, it is difficult to tell that Blockchain is still in its infancy. Data science may be one of the fields that benefit substantially when technology develops, and more innovations are made.