Categories
ONPASSIVE
Moving Ahead with ONPASSIVE

Moving Ahead with ONPASSIVE 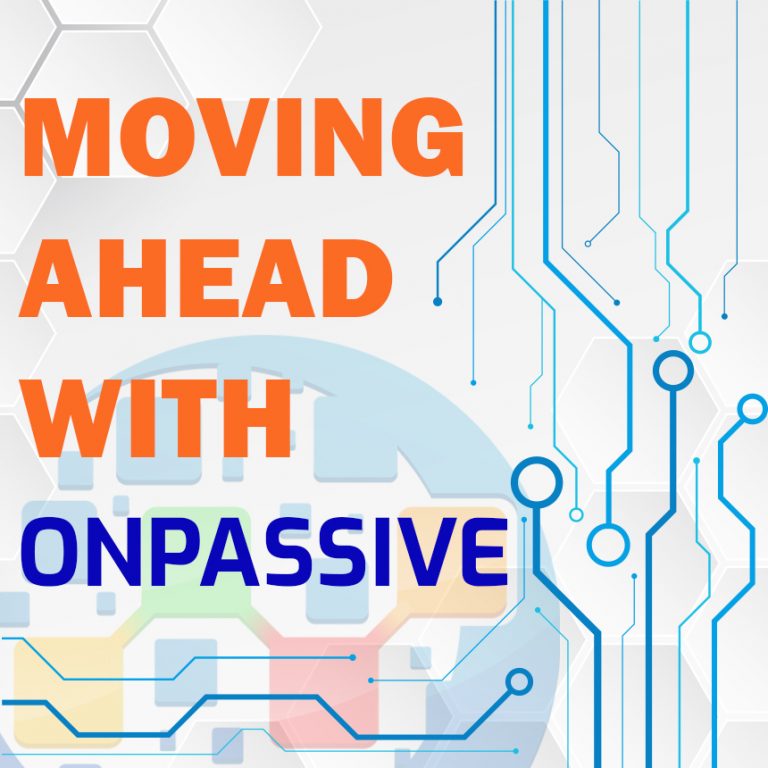 ONPASSIVE is primarily an Information technology (IT) company made up of its (1) GoFounders Network Community of first-line leaders, (2) Smart Business Solution (SBS), which houses the products and services developed by ONPASSIVE, and (3) Artificial technology (AI) to form a skeletal framework of support features for the entire platform. The entire system represents a first-ever Total Internet Solution (TIS)

“ONPASSIVE is the ultimate, complete and unique Digital Marketing Platform that ensures everyone succeeds, regardless of their backgrounds or ability, by offering the simplest environment with the highest standards and the most value while sustaining the benefits of a global stimulus plan.”

It’s been almost three years since ONPASSIVE’s inception by our visionary leader, Founder and CEO, Mr Ash Mufareh. The concept was developed and brought into existence during 2016.  Its AI-core development began then as well, as did its product development which continued through 2017 and is encapsulated in the SBS.

The first outward manifestation of ONPASSIVE came in the creation of GoFounders (GoFounders.net) which was initially launched towards then end of 2017, registered in 2018, and is about to migrate to the ONPASSIVE Platform for it final transition.

The second part of ONPASSIVE is a Smart Business Solution (SBS) which houses all the products and services ONPASSIVE has developed.  Development of SBS components were initially started several months prior to the launch of GoFounders and have continued ever since.

Several months after the launch of GoFounders, ONPASSIVE’s vision was solidified into a powerful statement identifying goals for the greater global good about August 2018.  ONPASSIVE is expected to open itself to the public in a matter of weeks and a public webinar is planned to take place February 4th, 2020.

The Sum of its Parts

GoFounders is the base for ONPASSIVE’s community of First-line Leaders known as Founding Members; “Founders” for short.  That base brought with it a complete set of very effective, online tools for use by Founders to invite others to join ONPASSIVE’s First-Line Leadership as the top 1% of the company and to stay in contact with each other.

New Founders are accepted only through an invitation from current Founders. Through the invitations sent by its existing Founders, ONPASSIVE’s First-Line Leadership… it’s top one per cent is built.  We will come back to this in a moment.

The second part of ONPASSIVE, is a suite of proprietary products and services known collectively as a Smart Business Solution (SBS).  The SBS contains many, many AI-driven products and services that have been developed from scratch by teams of developers that continue to develop them along with ONPASSIVE’s AI technologies. You cannot imagine the grand scale of these tools either in number or complexity; it is mind-blowing!

ONPASSIVE’s Artificial Intelligence (AI) technology, which represents the digital infrastructure…the spinal cord and skeletal structure…. supports all that is ONPASSVE and is the third leg on the stool supporting the full plate of ONPASSIVE.

All three parts are flawlessly and smoothly integrated to form the whole of ONAPSSIVE in its current state and includes everything within ONPASSIVE’s scope.  In its totality, ONPASSIVE represents the world’s first Total Internet Solution (TIS).

To clarify its products technology, ONPASSIVE creates its AI for developing and running its own products and services which are its own, hence, less costly but superior versions of every tool used for online marketing.

The AI technology running its business and SBS product suite is not for sale as any type of product.  Rather, it is part of the mechanism, the structure, the process, the engineering, and the backbone of nearly all of its products.  ONPASSIVE has created its technologies 100% from “scratch” and does not use any third party or second hand material.

Through development of GoFounders, Mr Ash Mufareh has established the creation a new breed of “One-Percenters” that can leave the massive fruits of their success as a legacy… as an inheritance to their children.  These are the top 1% of the earners in the company.

We have all heard of the “One-percenters”… usually in a very negative light because we are not one of them. The term refers to a member of the top one per cent of a population by wealth, ability, etc. (Also referred to as the ninety-ninth percentile); especially in a society with high wealth inequality.

Since Founders represent ONPASSIVE’s one-percenters, that can give you a nice clue to what’s expected in the near future. For a company in pre-launch to amass a leader-community of subscribed members in such high numbers is unprecedented and represents not just an online business record, but a fundamental shift in the way online marketing is being done.

ONPASSIVE is a Sustainable Model

To earn profits, ONPASSIVE is funded by subscriptions for products and services in the SBS by its buyers and re-sellers.  This means, the arsenal of products and services available in its SBS can literally provide every tool imaginable for our subscribing customer to create or automate an online business.

If our customer has a business or not, they can subscribe to all or none of the products they want. And these products are available at the lowest fair-market cost on the globe. This means if a customer has one or more existing businesses, the SBS tools can provide complete automation for them.

If a customer has no business, ONPASSIVE allows re-seller status for the customer to create a new business using ONPASSIVE’s SBS product suite.  In any case, ONPASSIVE serves to create success for everyone and seeks to “brand” the customer; not ONPASSIVE.

In this way, fuelled by its own machine learning technology, its Smart Business Solution (SBS) can re-group existing markets under the ONPASSIVE’s TIS umbrella by restructuring the whole process, duplicating it, and automating it through the use of its proprietary technology.

Naturally, it’s in ONPASSIVE’s best interest to protect its technology and structure with secrecy. Because this revolutionary, new model will completely shake the online marketing space to its core.

My personal belief is that GoFounders will be at 65,000 Founders minimally before the prelaunch campaigns start and will be at [or above] the 100,000 mark at launch. This means we will launch with the skeletal framework and the AI backbone of a Unicorn. You just need to get in while the gettins’ good!